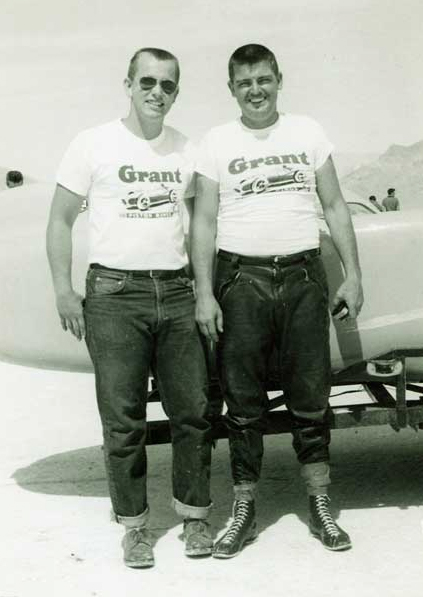 The Bonneville Salt Flats are located near Wendover, Utah not far from the Nevada-Utah border. The Salt Flats are a natural flat space perfect for high speed driving of wheel driven vehicles. There are many different classes of vehicles that compete at Bonneville. Motorcycles, roadsters, and the ever-popular Streamliners capable of speeds in excess of 600 miles per hour are some of the more popular classes. Starting in 1914 when Teddy Tezlaff set an unofficial record of 141.73 m.p.h. the Salt Flats have been luring people back to go faster and faster.

Willie Young in cockpit of world's fastest hot rod. It is powered by twin Mercury engines.

Mickey Thompson built Challenger I with four modified Pontiac V-8 engines, each with its own transmission. On October 6, 1959, he drove it to a World Speed Record of 363.48 mph.